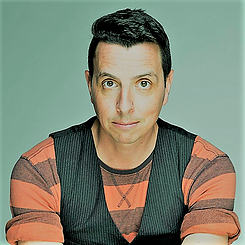 Rik Brown is a Melbourne-based improvisor, and his first year at the Nelson Fringe Festival will be a full one. He is performing his own solo show, The Rabbit Hole, as well as starring alongside Christine Brooks in Museum of Broken Relationships, and popping into Here’s a Thing with Jennifer O’Sullivan. Rik will also be hosting a workshop, aptly titled The Improv Bootcamp.

This morning I was lucky enough to interview Rik about his involvement in the upcoming Nelson Fringe Festival, and I have to admit that I am very excited to see what improvised creations he will bring to the Refinery stage!

To begin our conversation I ask Rik to tell me about his show, The Rabbit Hole:
“I used to call it Solo Brown, but that’s just the name that it ended up with. I’ve changed the name to The Rabbit Hole because it seemed more fitting. I can’t even remember why it was called Solo Brown. No I do know why, it was Jennifer O’Sullivan [a Wellington Improvisor] suggested it and she makes everything sound good.”

How is this performance going to be different from past performances (apart from the obvious nature of it being improvised!)?
“It’s sort of evolved a little bit and I’m using a musician in this format. This will be the second time I’ve used a musician with this solo format. Isaac Thomas from Nelson is going to be onstage with me for The Rabbit Hole which will be fun!” 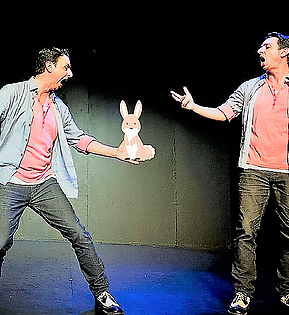 And where did the idea originally come from?
“I got inspired to do it, probably a few years ago, by watching some people that I admire like Jill Bernard, and Liam Amor were doing some great solo stuff that I’d seen and I thought I’d love to give that a go, but I never had the opportunity. And then I threw myself in the deep end and started doing it and it’s been great. But it does keep evolving, you sort of learn a lot every time you do it. Every time you’re onstage by yourself you learn some valuable lessons.”

Every time you’re onstage by yourself you learn some valuable lessons.

What’s it like doing a full hour show as a solo performer?
“It can be tricky, but I think when you’ve got a musician it’s a little bit easier because it’s not just you out there. There’s the added sound element and you can start using music and song to add to the texture and complexity of the show. I think if you’re going for an hour it’s helpful to have that musician, just for the extra dynamic.”

So what kind of things do or can you prepare before you’re in front of an audience?
“I don’t even know how I’m going to start the show. Sometimes I get a word from the audience, sometimes I don’t. It depends how I feel when I walk out onstage… It will just be me making stuff up somehow.”

That’s pretty impressive! How long have you been improvising?
“Oh, a long time now. Probably for a good twenty years… It’s been a very fun and exciting journey… I’ve taught [The Improv Bootcamp] at different festivals… it’s a great one for a festival environment or when you’ve got people at different skill levels.”

So what does your workshop include, what should we expect?
“It’s a lot of improv. It’s a lot of different ways to get thinking spontaneously and creatively and having fun and really just mixing it up with all of the different people in the group. It’s high energy at times… the emphasis is on having fun and working together and being playful.”

What might you say to those of us who are not experienced improvisors?
“Don’t be scared, there’s nothing to be afraid of. I’ve taught a lot of introductory improv workshops in Melbourne with different groups, so I’ve worked a lot with people who are new to improv. So I know how to ease people into the process and get them having fun and being playful…. [I like to] Create a fun environment where we can sweat it out together.”

Is there anything in particular about the festival that you’re looking forward to?
“I’m looking forward to being in Nelson, from what I can tell it’s an amazingly beautiful place. From all accounts it’s a good looking place to hang out… I love going out to see any old show, so I’m happy to just be sitting in the audience anywhere and having a good time.”

Finally, do you have any advice for audiences or fellow performers?
“Standard advice: people get out and see some shows, enjoy the Fringe, a vibrant and artistic community that should be supported on every level. And also get some Global Soap, it’s a legendary product that I support 100%”

The Rabbit Hole has been adopted by the tea at Global Soap, click here to find out more about their amazing product!

Echoes from the Wings

A Nelson based website focussed on offering constructive responses to artists.